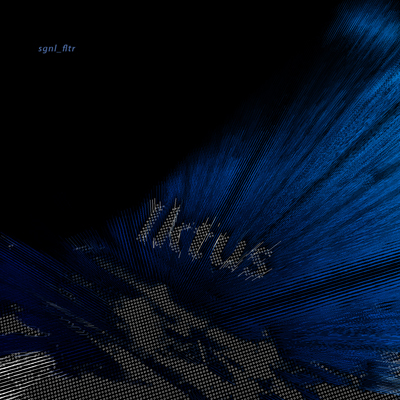 Iktus is the second sgnl_fltr album Stadtgruen has released and the third release to feature Danny Kreutzfeldt, the Dane behind sgnl_fltr. The 8 tracks we received from Danny were attached with this message, in which he announces the end of the sgnl_fltr project, but also more sgnl_fltr netreleases:

There’s three obvious ways for me to describe Iktus.

Poignantly; Iktus is eight pretty straight techno tracks. Each track is a remix of the previous one, and each track contains a filtered sampling of an old blues song as baseline. The name of that song is not important. Iktus is definitely inspired by a (late) 90’s conception of techno, just as I’ve tried not to do ‘retro’ techno by avoiding the worst clichés of that period’s productions.

Processually; Iktus was made in the Fall of 2006 as a result of playing around with my sgnl_fltr sound library in the sequencer program Fruity Loops. As a rule, I didn’t touch the default tempo setting of 140 BPM, which is easily 50 % faster than most sgnl_fltr tracks. This made the process a question of inducing some thrust into the sgnl_fltr samples, which have usually been moulded into ‘interesting’ but otherwise dark and sleepy structures.

Personally; Iktus should have been a form of re-entry into doing rave music, which I spent a lot of my teen years on. But instead it left me unreconciled to the point of disillusion. In the process I realized I was practising an approach in a lot of my productions, that results in safety, nostalgia and irrelevance rather than an honest pursuit of fulfilling experimentation - which was probably the main reason I started doing ‘experimental techno’ as sgnl_fltr. Since the production of Iktus I’ve tried other approaches within the sgnl_fltr project, but the notion of nostalgia surrounding the use of rave as a material or a point of departure hasn’t left me. Long story short, and despite a bunch of positive experiences with the project, I’m sure there wont be any new sgnl_fltr activities in the studio or at concert venues.

For reasons that still escape me, I have made a lot of unreleased sgnl_fltr tracks over the years - and at a certain point, I made the decision to forget about them. But just as I was about to rent a safety deposit box to store them in, I thought there probably was a bunch of people not half as disillusioned as me. The kind of people, who would think it was a nice gesture, if I found a way to put the tracks to some use - especially one that involved free downloads. By this line of thought, Iktus is one in a short series of netlabel releases featuring some of these unreleased sgnl_fltr tracks. Have a look at kreutzfeldt.dustopper.dk to keep track of the others.