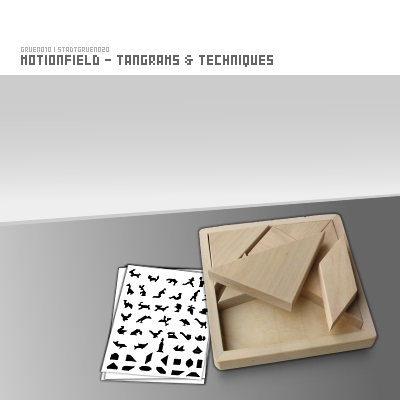 From time out of mind heaven is always symbolized by the infinity of a circle and earth by the finiteness of a square. Tangram is an ancient Chinese puzzle which cuts the square into seven pieces: five triangles, one square and one parallelogram. The goal of the game is to arrange the pieces to create given geometric shapes, human figures in motion, buildings, animals, letters of the alphabet, etc. But it is also possible to create new designs and their number is limited only by imagination and time of the player.

The post-structuralistic music production seems to take the line of the tangram. Its technique uses a finite number of elements e.g. a certain sample-database, a sample-player, and a sequencer, in order to create an endless flow of new tunes. Due to the fact that all pieces are well known the result will always sound familiar, even if it is sometimes experimental and chaotic. But it is not only a question of the right equipment: In the end it’s up to the skill of the player if the newly created figure gets a pleasant touch.

On the whole we have build up a ‘re-culture’. Remixing, redesigning, relocating, even relaxing are daily states of the perpetual replay. And it is worth while to reflect if we have lost something or gained a lot. ‘Motionfield’ uses the title for his release very consciously and leads us into the endless fields of possible music, developed from a common ground of sounds and styles. Like a tangram-player he moves the pieces until a new figure is composed. Through the serenity of someone who sways the technique, he let’s appear silhouettes of different genres but only to move the pieces again. He takes the given reduction as a challenge for scooping the plenteously filled reservoir of our musical memory. And with lax virtuosity he rings the claviature of forgotten emotions and combines them anew to lyrical snapshots.

Maybe we have lost the idea of creating something original but thus we have gained a deeper insight in the infinite circle of possibilities which lie in a dissected square.