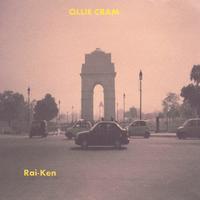 Something different, this time out, with the part nu-chill, part world music, part live-played album, ‘Rai-Ken’ from Bristol, UK native Ollie Cram - it’s pitched somewhere between the chillout of previous Monotonik releaser Izmar and something much further out than that, and that’s why we dig it.

Things start out with ‘Over Yonder’, all interplay with the live-played organ - there’s also guitar, keyboards, synth, bass, and mandolin played live on the album by Mr. Cram himself - before we move on to the funky guitar interplay of ‘Whatever You Say’, and far beyond that.

Some other highlights? The positively glorious strut of ‘Peace In Our Land’, and the almost elevator-muzak chill of ‘Rai-Ken’ itself. Again, this may not quite be our normal speed, but I think that’s why we like it - it’s good to be different, and the album, which was previously available on a number of paid music download portals, is all kinds of out there.