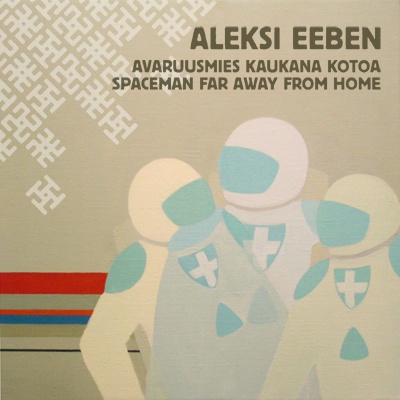 Seriously, what else is there to say about Finnish old-school Amiga demo scene legend Aleksi Eeben, aka Heatbeat? Way back in 1990 or so, when he was in his early teens, he produced some of the best music the Amiga has ever heard. As his talent grew throughout the ’90s and into the new century, his jazz influences and unique retro electronic background (he also codes music composition software for the Commodore 64, Game Boy and even VIC-20) have produced an unbelievably unique style.

The spectacularly tonally different stylings of Eeben, who works at a ‘famous cellphone company’ in his native Finland on sound-related products, are showcased in this album for Monotonik, ‘Avaruusmies kaukana kotoa’, aka ‘Spaceman Far Away from Home’. An early highlight is the wonderfully busy skank of ‘Spaceman’s Small Step’, or ‘Avaruusmiehen pieni askela’, but everything just glows, with ‘Avaruusmiehen alakulo’, aka ‘Spaceman’s Low’, another beautiful example of Aleksi’s differences. We end with a couple of bonus tracks, with ‘Traveller’ a particular highlight, all sinuous melodies that just range in the oddest, wonderfullest ways.

So, we’re not saying it isn’t an acquired taste, but when you acquire it, you’re likely to never forget it. And while you’re listening, you can read the accompanying story behind the album: ‘Adventures of Spaceman John’, by Kristoffer Lawson, as follows:

“Far away, John and his robot were sailing on the backs of star-beams. Fifty light-years or so in their cylindrical spaceship. Robot said he liked the way the star’s light bounced off the red planet, a giant one, on the port side. Like shimmery little fairy dances circling around their travels through the void. John smiled and lifted his glass of space-juice in an ancient gesture of comradeship. Aye, that’s life at it’s best, he reckoned.

After three more days of travel John and his robot arrived at Destination 34. A large moon around the fourth planet of the system. A jolly wee bouncy kind of rock with scampering little bacteria and small fish-like creatures swimming in the deep dark lakes. Some of them had fluorescent colours and shone brightly and merrily. Some of them were mating, some of them were jiggling, some of them were just having a party. Robot blinked his lights in response and several of the lifeforms twirled round him, curious. He did not seem like a proto-fish. He was all hard and jagged. Like a rock of some kind. John patted him. They’ll understand one day, he reassured.

Inside one of the caves was a dark slithery plant, waving slightly with the drifts, as if to a distant melody. She beckoned to the travellers and they floated to investigate, transfixed. Her many hands swayed erotically. Her deep colours changed with every move. She gently touched John’s cheek as he looked closely, with robot soon behind. He kissed her leaf-wrist and bid her good bye, for their journeys must go on.

Back in their spaceship John sighed. Robot was a good companion but still his life missed something. A home to come to. An arm to stroke. Lips to kiss. Hair to feel. Of all the wonders in the universe he had seen, no wonder would replace that simple existence. Robot shut down for the night. The computers rattled on. John looked out into the deep, deep darkness and its millions of sparkling lights. Lives. He fell asleep holding their hands as the spaceship zoomed on and on into the empty unknown.”