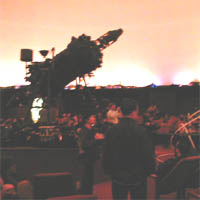 We’re delighted to present the final release in a trilogy of ‘virtual 7-inches’from Australian Mark Mitchell, aka Super Science. These tracks were originally released on the super-duper-limited Splashdown CDR series in 1999, and we’ve picked out the best unreleased tracks for Monotonik, to put out for free.

As mentioned before, Clue To Kalo, Mark’s new project, has had its ‘Come Here When You Sleepwalk’ album picked up by Mush Records in the US and The Leaf Label in Europe, and we HIGHLY recommend checking that album out if you want to hear the evolution of his vocal-blended, lush style that has the guys at Leaf comparing him to early Badly Drawn Boy and Folk Implosion.

This time round, “Take The Time To Take A Trip” is a lush, keyboard-led ramblethrough indie-electronic eddies of sound, with a beautifully sung refrain and amarvellously laidback feel. The second track, “Greenwich Mean Time Machine”,starts with birdsong and recordings of a summer’s day, and then drifts througha nirvana of melody and pure sound. Good, good stuff.