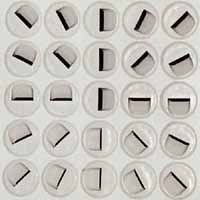 We’re pleased to welcome another debut, from Swedish artist Anders Svensson, for the 100th mp3 release on Monotonik, wow. We’ve been doing this net.label thing for a while now (almost 7 years!), and we’re delighted there’s still fresh and exciting material like “Keywords EP” coming along to make us happy, contented, and.. well, blissed out.

As for artist info - well, this is a debut under his own name, but Anders Svensson was formerly in a number of Scandinavian indie bands such as Eldarens Hus (signed to Virgin in the late ’80s) and Sulky (alongside former members of the seminal Union Carbide Productions.) His electronic experimentation in the art of, as he puts it, ‘simple melodies and sweet harmonies’ has spawned the quite lovely “Keywords EP”.

So, “Present” is a great present to start with, combining a sorta pastoral, drifting air with some genuinely quirky melodies which intentionally drift cyclically. Then, “Memories” uses tiny snippets of voice rhythmically, and then drives improvised synths straight through the top of it to mesmerising effect. Finally, “Returning” feels like the end of the line, almost summoning a ‘Blade Runner’ feel for the epic, cybernetic sprawl, where acoustic meets electric meets neon in the realm of the bandwidth gods. Drift on.