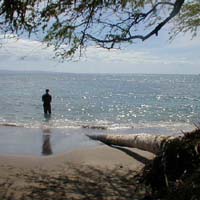 After digging delightedly around in the archives, Monotonik is delighted to present the first of three ‘virtual 7-inch’ releases from Australian artist Super Science. All these tracks are taken from sessions done in 1999 for his super-limited Splashdown CDRs, and it’s the first time they’ve been available anywhere besides those impossible to find releases.

For those of you who don’t know Mark, aka Super Science, from his previous releases on Monotonik, his Splashdown CDRs were followed by an acclaimed album on Surgery, “Love Like Life In Miniature”, and that brought him to the attention of the US-based Anticon posse. Now called Clue To Kalo, his CD/LP on Mush Records, “Come Here When You Sleepwalk”, is out soon, and he’s been playing live gigs using a band in Australia, ahead of touring with other Mush label peeps in the US and Europe in 2003. Plus, there’s still rumors of a darncool European label picking the album up over there - more news as we get it.

It only remains for us to swoon over the idyllic melodies and vocals of “You My Glimmering Satellite”, plus quiver over the multi-tracked drift of “Samuel Crystal Bloom”, and then hand you over to Super Science himself for his comments on the release - he’ll be talking about each of these EPs as they’re released. :)

‘When I started making music I used my computer and a Tascam 4-track cassette recorder. I played a song to someone and they suggested I burn some CD-Rs and sell them for $5 at the local record store. I did, and sold fifteen discs over a period of five months, all to people I knew. I was very rich.

When my CD came out on Surgery, we took a few of these old 4-track songs and put them on the album. Lots of them didn’t make the cut. h0l is putting out some of those songs out as a series of virtual seven inches because he’s a swell guy. I thought I’d give a blurb about each song because it will show that back then I mostly wrote songs to try and impress girls.

‘Samuel Crystal Bloom’: This is a song that isn’t about anyone. When I gave a tape of my music to a friend, this is the only one of the 17 songs he liked. After that, it always came first on any demo tape I made, because I assumed it was my ‘good song’. Later I wrote a song that he thought was better, so this one was relegated to second place.

‘You My Glimmering Satellite’: This song was written for a girl that I had a crush on. She didn’t like me in ‘that way’, but I knew that all it would take to win her over would be a nice melodic electronic love tune. After I wrote it I recorded it on a tape and hurried round to her house. This should do the trick, I thought. We both sat in her living room and listened to it. It was the first time I’d sung on one of my tracks. After the song failed to impress her, I swore it’d be the last.’