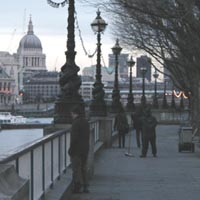 The ever-fertile Australian electronic scene has spawned another gem, this time the offspring of an earlier Monotonik releaser, in the duo Toby1, comprising Ruth Wilson (vocals/instruments) and Duann Scott (composer/producer/instruments). Duann put out an earlier Monotonik release under his real name, and also released a warmly-received album on Surgery as part of Modula, and Ruth was formerly with cult Aussie band Masongreystrange.

Anyhow, the duo have been getting significant buzz down under, with an acclaimed live session for the Triple-J radio show, and we eagerly await their forthcoming debut on Surgery Records. But in the meantime, they’ve been kind enough to donate us a couple of stunning tracks to whet your appetite.”European” is a gorgeously sustained lullaby of whispered thoughts, evoking perhaps Lamb, but with so much of a crunchier, chiseled edge, with the wistful vocals intoning “Let’s go for a drive.. let’s be European”. And “Homely” twins mellow but stuttering drums with leaping synths and vocals so intertwined that there’s literally a sea of sound to float in. “This feels like bliss”, indeed..