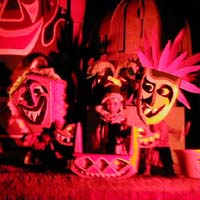 It’s always good to find an original, slightly more maverick voice in the world of electronics - someone who, if not channelling the punk aesthetic, at least goes out on a little more of a limb to imbue their music with edge, unpredictability and, well, soul.

So, when US-based Grandma sent us a whole raft of his music, we immediately cottoned on to the mix of alternately classic idm-ish melodies, super-intricate drill+bass programming, and improvised guitars/vocals.

That in itself should be enough. But then, we found out that all this music was only composed with the most lo-fi of components - only one speaker, using a microphone purloined from a Japanese language-learning CD-ROM, being forced to use a single take for all the guitar and vocal elements, and, most incredible of all, that Grandma, aka Khonnor, is only 15, and this is his first widely-released music anywhere. So it’s just the start. And we can’t wait to see what happens next.

This debut EP for Monotonik, “Spinach Gas Room..”, is compiled from a selection of Grandma’s most prodigous output from the last few months, and we start with the echo-filled guitar improvisation and the super intricate drum patterns of “He Near Krxern”, before transitioning into the total idm classiness of “Sandy Point”. The second half is, if anything, even better, with the incredibly soulful, barely sung drift of “Why The F*ck Did You Eat My Babies?”, and the straightahead, supremely melodic intricacies of “Strawberry Rhubarb Oppai”, all adding up to.. specialness. We dig. A lot.