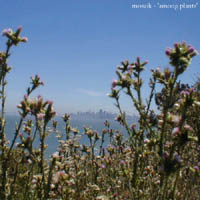 We gladly return to the gorgeously lush hunting-ground of ex-demo-sceners, with this sublime ambient release from the artist formerly known as Radix/TPOLM and additionally known as Rymdlego, Sinespree, and his pseudonym for this release, Mosaik. Originally from Sweden, but last heard of heading to Holland, his last two Monotonik releases (as Radix and Mosaik respectively) were sinetastic in the purest way.

So, having caused at least a minor buzz on the idmlist with his confusing multiple pseudonyms and refreshingly pure sound, and with much love from demo-scene denizens for his perfect ‘chiptunes’ (he’s currently voted 3rd best of all time at chiptune.com), we decided to crassly attempt to shove his subtlety in your face some more. if you don’t mind, of course. But it’s just too yummy to pass up.

Anyhoo, “Among Plants” starts off with haltingly swelling synths and an almost Eno-esque repeated piano riff, and kicks in bubbling bass and almost imperceptible heightening through gyrating arpeggios and sound swells and eddies. For us, it sounds swell, mighty swell, something like the most blissed out eddies of an Apu-impelled Squishee coma.