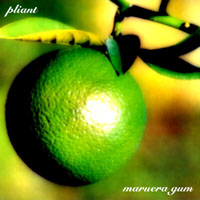 When we were approached by US idm-er Pliant, who you may know as the label-boss of the superb videogame.elektronik.otaku peeps, Systorm Technologies, and the mastermind behind the experimental idm-ish video label, Frogbomb, and he said he had an entire album available for release on Monotonik.. well, needless to say, we jumped at the chance.

And actually, we’re still jumping now. “Maruera Gum” takes the acclaimed “Zelda’s Windmill” from the Pliant/Bokatsu “1UP” 7-inch as a starting point, and cuts up 11 tracks of pure, rhythmic, video-game-inspired electronics. If you want a good starting point, then try the acoustic guitar + quiet storm percussion of the first track, “Rye Toast”, the ‘piercing clear melodies’ of the afore-mentioned “Zelda’s Windmill”, and the spot-on tribal steel drum harpsichord breaks of “Forest Cake”.

And with many of the tracks mixing into each other, you’ll want to grab the whole caboodle just to check out the hidden majesty of spook blink luck “Toothpowder” or the plain dysfunctional “Latch Esis”. You’ll find that, the more you listen to this album, the more its intricacies draw you in and swirl you around the sketched-up pliability that is Pliant’s (s)nes.hop world.