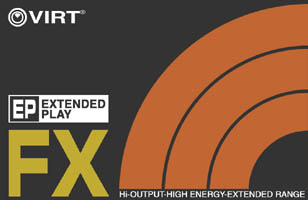 It’s not often that we rave so much about an artist that our eyes come clean out of their sockets and roll around at cheek level ‘til we squidge them back in again. But in this case, we reckon the permanent vision degradation is worth it just to alert the world to Virt’s presence.

So, Virt, aka Jake Kaufman, is a US-based .MOD tracker and video-game composer with many Nintendo Gameboy and Gameboy Advance credits up the wazoo (including “Q-Bert” and “Who Wants To Be A Millionaire?”, niiice.) And we’re pretty sure he’s the Rob Hubbard of the ’00s. No, seriously.

To quote from Virt’s own nfo-file for this release:’these tunes are all part of a single imaginary game. picture castlevania meets gargoyle’s quest to explain the baroque/cockrock hybrid.’

So, taking influences from classic game soundtracks, Virt has sorta ‘faked’ the NES sound engine on a PC to create these amazing tributes to oldskool game-music. So, whether it’s the ornate arpegiating of “Good Morning, Dracula”, the deeply funky bass permeating “Waow”, or the amazing breakdowns in “Bzam”, you know you’re into something out of this world.

[And as for the bonus track, “Classical Favorites 2”, with the cheeky pause/unpause action and staggeringly complex instrument- programming under supa-extreme limitations - well, don’t even get us started. It’s yummy in our tummies, yet again.]