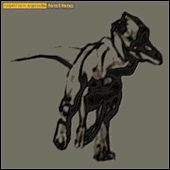 Israel’s Nimrod Tsabari (as Reptilian Agenda) makes his HI deubt with the half-hour, continuously mixed Fatal Fang EP. Taking a step back from in-your-face dance music, hi002 is a release centered around swirling atmospherics, consistent percussion, dark drones and vague voices. While words like “trance” and “minimal” can be used to describe this EP, from its psytrance-styled synth melodies to its extremely repetitive nature, Nimrod crafts his sonic palette without care of classifications or genre expectations. The result is intelligently-designed music that tells a story while still being subdued enough to fit into the background of any situation. Fatal Fang is split into five movements, each one introducing subtle shifts in texture and theme, though never trailing too far from home. By the end of the final movement, you will have gotten so used to Nimrod’s soundtrack that you’ll want to start it up right over again.