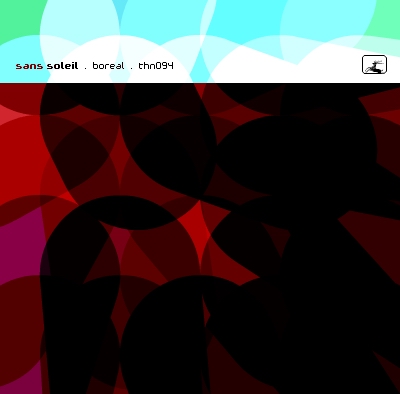 Laden with field recordings, voices, and processed pop-music samples “of the most sugary-sweet, top-40 kind” Canadian audio-visual artist Michael Trommer makes his first appearance on netlabel Thinner as Sans Soleil with a virtual long-player of intelligent pop-flavored techno given the title of “Boreal”. The title itself which means of or relating to northern regions gives a clue as to the theme behind the music. “Boreal” follows in the footsteps of other releases by Michael on various electronic/experimental music labels such as Transmat, Stasisfield and many others.

Inspired in part by his “fascination with landscape” which has its origins in the Canadian mannerism of deriving at least part of their national identity from the topography and climate of the land itself, the music on “Boreal” helps close the gap between pure dance-floor oriented music and the more experimental, electro-acoustic works that he creates for his audio installations and as part of the sound-video improvision collective I/O Media. Michael refers to “Boreal” as “a mobile soundtrack for a walk through the snow…dancing in your head.”

As you listen to the seven compositions encompassing “Boreal” you’ll hear a clever fusion of techno and pop music with synthesized sounds and field recordings. There are no fillers to be found here. Every song is unique and robust in its own right. Aggressive techno beats and warm dance-floor rhythms are tempered with a dulcet layer of pop samples and familiar environmental recordings to a deliver coolly listenable blend of distinctive music that is made equally well for the dance floor as well as intelligent listening.