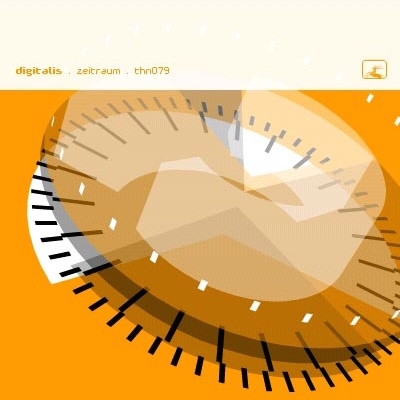 With “Zeitraum” the swiss duo Digitalis present their first longplayer on Thinner. They are not new to the Label, as they have contributed remixes and compilation tracks in the past, besides their first EP Sin:Ergy (THN022) from 2002. But just in case you’re not familiar with those guys and have not checked out their own realaudio.ch empire so far, who are Digitalis?

Digitalis are two guys from beautiful Switzerland. The digital world plays a major role in the life of Roger and Nick, not only for when they get together in their studio to construct musical buildings but also job-wise (architecture / software-engineering). Because of this proximity of new technologies between job and music, one can feel that it is obvious that they feel attracted to the possibilities of creating soundscapes with laptops, both from the technical perspective but also from the aspect of musical freedom.

But how exactly do those guys work together if they don’t exchange files over the internet, but work together in a studio, both with their own laptop? Digitalis note “While working in the studio, the roles change dynamically; in the end contributions from both of us circulate in these tracks. During the different steps of song production we decide sort of basis-democratically, gain mutual inspiration and agree on a common terminology. The decision for digital means that synchronous common working becomes possible. Since we generally have the same wavelength, a friendship has emerged also offsides the studio.”

This synchronous work has now led into the longplayer “Zeitraum”, which summarizes selected efforts of the past three years. “Zeitraum” is about the idea of connecting emotion with experience - ideas that form a certain character, that is getting worked out to one theme in the end. This process needs it’s “space of time” (=engl. translation of “Zeitraum”). The songs grow upon time, as the impressions and experience of composing during their performances needs time to mature. As Digitalis actively perform livesets, that have brought them into multiple european countries, mostly accompanied by VJ Sam Graf (sgis.ch), sketches are tested live and based on the feedback and reactions are progressively developed until finalization. Spontanous, random work is disregarded, music takes time just as precise architecture or software engineering does, too.

“Since a longer time we work associatively with three colors: “Blue” (Calm, Ambient), “Yellow” (Experiment, Sounddesign) and “Red” (Movement, Dance); colours that represent three different levels for us. On Digitalis all these colours and achievements should become audible, extended with the factor time.”

Starting with “Azkoyen”, a song that is aligned by the blue colour, a song that builds through an aluminium steam tunnel during their voyage to Barcelona last year to meet Fernando Lagreca and play on a gig. Or “Phlow”, dedicated to the red colour, a harmonic trancey electronic piece with reminiscences to the Harthouse work of the Mid 90’s. The yellow side is featured in the middle of the album, building a bridge between the blue and red phasis. “Pheromone” are the love hormones of people. With this song, Digitalis express their passion for eclectic electronic sounds, which is their longest love. Same goes for “Synthetik”, although for this piece they also experimented with their own voices.

So what about the environment that puts the duo into the mood that make Digitalis sound like Digitalis actually. One indicator for that might be the different musical background. Where are intersections, where are differences?

“Roger’s long-time experience of DJ’ing and Nicolas slope to harmony reliably flow in large parts into our music. The longer the period of our co-operation persists, the better and the more intensively the exchange between these levels flows into each other. But there’re more factors where we gain our inspiration from. The friendship to Netaudio supporters like Sam Graf (sgis.ch), Benfay and other heads from Bern share similar vibes. Besides to this constant exchange, the cooperation with Holger Flinsch is present, which led to mutual Remixes that can be heard on this album. The more we are embodied in this network, the more distance of models arise, and the selfsufficiency in terms of sound could develop.”