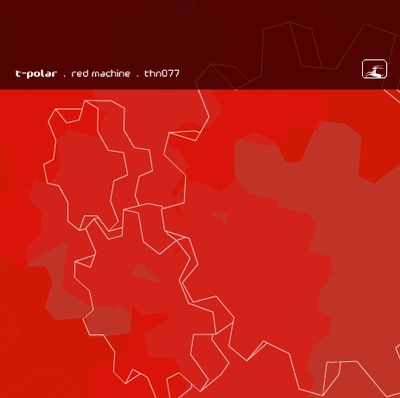 Gary Spence aka T-Polar offers an extra-ordinary richness of sound within his universe of Microfunk that is difficult to comprehend immediately. Music that is difficult to describe even after listening to it multiple times. Somebody who tries to stick to a review of T-Polar’s music will not get the idea of the reviewers description because T-Polar is just something else than the usual groovy minimalism one might or might not be familar too. Therefore we won’t try to describe what’s waiting for you inside this release - just listen to it and figure out by yourself if this one grows upon futher listening it or if it’s not your cup of tea. Us at Thinner can tell that we don’t like this album - we just adore it.

Red Machine is the result of introducing a more organic urban inspired sound to the minimal music T-Polar has made in the past to give more options, more emotion and reflecting his ideas in a slightly more “human” way. “Red Machine” itself is the turning point of years of production and the attempt to access a more rounded style and incorporate the slightly more eclectic tastes which T-Polar has accumulated over the years which will be shown in later work as it grows on from this - a soundtrack to a lamp light centre of population

T: “If T-Polar’s 2004 releases were a bit more obvious 80’s House the new album has kind of an Arcade funk trademark incorporated with the House reminiscences put a bit in the background although they are present within the whole album for sure. What are the ingredients of the T-Polar universe and what do you think are the differences between the 2004 releases compared to “Red Machine”?”

G: “I think its just a progression of interests, the previous releases I had been very influenced by the Minimal Techno and House side of things and decided to make my own twist on that - a lot of the elements are still there with Red Machine but felt a much wider range of music influencing me and a need to make things slightly more human in a way. I would call it a mild direction change towards a fuller sound and more interest in vocals and how they can affect the feel and arrangement of the tracks. Also a desire to keep things original by trying to steer clear of a set genre and offer a bit more of what I’m really thinking. Melody suddenly got more important.”

T: “Once again this is extra-ordinary music that feels somehow mystic with it’s many layers but also close, groovy and easy to access. In other words, they combine distance and proximity. Some tracks offer many different perspectives, especially “Summer Daize” and “Travellers” sound like colourful futuristic downbeat house (or something!) - how would you categorize your music and are those pieces more experiments through jamming than sequeneced & pre-mapped songs?”

G: “I always have problems categorizing the stuff I make not to mention trying to figure out who might be into it and it’s semi-intentional. Like most people I wouldn’t want to be pigeon holed and I probably make an effort not to purposely pigeon hole myself. As I said, steering clear of obvious genres is a must as I don’t think it would be the natural results of sitting down to make a track unless you were only interested in a certain genre or if you decided to make music for DJs. I would like people to stop for a second and wonder about the music, what makes the producer think this way, where you would begin to make it etc as opposed to thinking certain tracks would work well in a set or in a club. It’s not really intended for NightClubs although I hope some of it might work well in that setting but I would prefer different associations - odder settings - maybe more personal to the individual than just something to dance to then dispose of. The slight extra human touch maybe comes from the jamming as you mention - not sequencing everything to perfect mathematics or being over technical in certain departments - improvising to a certain extent and almost programming some elements to improvise by themselves.”

T: “I guess the track “Red Machine” is the main track of the album - this one once again combines alien funk with this unreal soft pads with this particular ethereal melody and groovy slow motion house rhythms. What is your association with this track, can you describe what makes the Red Machine here?”

G: “This is probably the most important piece of the album to me and the real cornerstone in interests. It was originally intended to have full vocals over it and be a bit more of an electronic funk track but I wasn’t able to do that at the time - but it definately is a vision of the future for me and a strong sign of where I’ve been since and am looking to go back to. It’s more about the melodies than most previous music I’ve made and I’m pretty pleased with it - it’s got a slight element of joy to it but an underlying sadness. I would also hope my sense of humour comes through in some of the music but it may be too deeply buried. It’s there somewhere I promise.”