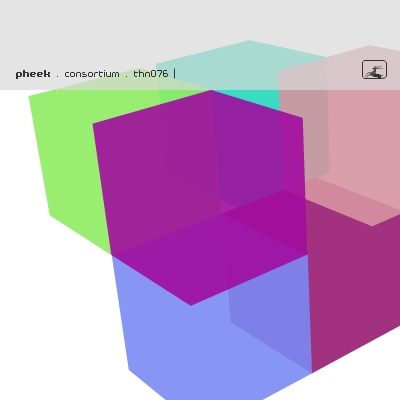 Thinner number seventy-six brings you the ever diligent Pheek from Montréal with a collection of tracks that have been produced over the past 2.5 years. Two of those tracks have been produced with Benfay according to JPs stay at his place back in 2002, during his first european tour. The original track “Dub Trail” sees a remix by T-Polar, with whom Pheek played in Belfast early April. Other cooperational tracks with Jason Corder are on their way to end up with a CD release under the project belt “Social System”, so Pheek’s many project involvements reveal that a major part of his musical life is all about consortium! Speaking about, the latter project with Jason Corder recently saw their live debut on the Mutek Festival.

However, the tracks included on this EP are a bit older of date and gently reflect the time for when Pheek predominantely worked with pads in his minimal environments. Due to his involvement with hardware labels he lately produced more functional, more reduced stuff. But releasing these tracks that have been produced 2002-2004 reflect a time where Pheek has successfully started to get himself establish in the guild of the prolific cutting edge minimal producers, introducing a very own style, constructing variable minimal tracks with punching hi-pass bassdrums and mostly eerie effects. So, Consortium somehow closes the circle.

In March 2005 after finding his own outlet Archipel and numerous releases both on netlabels and hardware labels in the meantime, Pheek returned to play a healthy amount of gigs in the U.K. and Germany but also to find out about how recognition over here is going: “There’s two things that were getting very important to me as I was travelling: I wanted to see what was the importance of Netlabels in the club scene and also, I wanted to see what is status of the minimal scene as well. I was pretty happy to realize that both are very well established and very healthy, but still small. I was very impressed how much people came to me because I was on various netlabels. Even though I was released on Minus or Contexterrior, I was thinking people would come to see me for that, but it was actually because I was one of the active netlabel producer at the moment. I also realised that people who are into net- labels are very knowledgeble, know a lot about music and are extremely passionate to get the latest thing available. That’s very refreshing to see we’re not working for nothing. From what I experienced, the vinyl releases seemed to give me a lot of credibility for DJs as for the netreleases got me a lot of supporters from people who love to browse and search for music online.”

Having said that, the tour went pretty well and Pheek used the time for extensive networking, so he brought a lot of impressions back home to Canada: “I think meeting a lot of people in Europe made me feel like moving there as well. This is something that a few american artists did and I’m getting there. Somehow, I feel a bit isolated from a distant scene in which I feel I have a place and where I’m appreciated more than where I come from. We’ll see by the end of the summer.”

Being active in the music biz since many years now Pheek knows very well that the road to success is a long and windy one. We’ll indeed see what happens but one thing for sure - Pheek carefully watches developments taking place and will take the right decision. Whereever he will decide to stay.