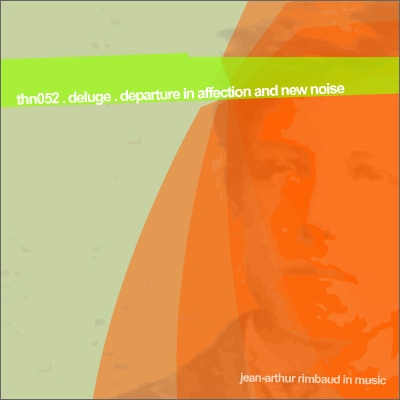 „deluge“ is yet another project of the virtous Montréal elec- tronic act Jean-Sébastien Roux, whose album „Acoustic Lazy Dolls“ was released on Autoplate in December 2003. That album was promptly awarded “Netaudio of the Month” download by the German mag De:Bug. And with Jean-Sébastien Roux presenting his new album he impressively proves that his idea of music fits into the Thinner concept to modern house between Dub and Ambient very well.

Within the longplayer „Departure in affection and new noise“ Roux moves along conceptionally and praises the works of one of the most considered modernist poets, Jean Arthur Rimbaud.

Rimbaud was just 19 years of age when he already had his effort in literature done – poems with whom he wanted to change the world which made him in the longterm an ultimative cult figure after his early death of cancer. A lyrical revolt against all conventions of society, morality and religion. Synesthesis, introducing slacking verse- constructions and the development of the vers libre in his rhythmic prose poems made Rimbaud one of the most important keyplayer of the Symbolist, Surrealist and Existencialist movements.

Rimbaud’s work was continously crosslinked with music. While studying Rimbaud’s poems Jean-Sébastien Roux realised this, so he started with a musical approach of carefully selected Rimbaud poetry. While composing Roux always had the intention in mind to cross a bridge between the lyric and contemporary electronic music - every songtitle carries the title of the interpreted poem from Rimbaud and tries to reflect the emotions – encrypted, but catching most likely and unique, which is made audible in the mix- ture of self-esteem and resignation.