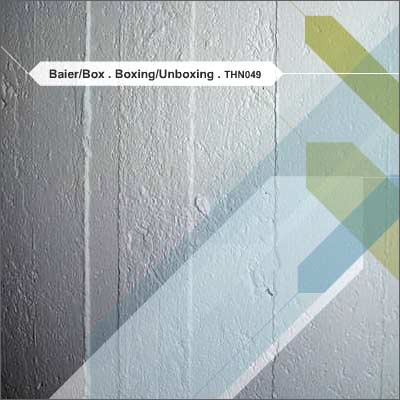 The project “Baier/Box” consists of Dominick Baier and Bao-Nghi Droste. In 2001, the two longterm friends joined efforts to realize a shared vision of modern “4-to-the-floor” dance music. The defining characteristic of their sound stems from a completely digital production technique - programs like Reaktor, Absynth (Native Instruments) and Live (Ableton) contribute to a clean, crisp and very detailed aesthetic. Besides their collaborative output, both artists are accomplished solo producers.

Bao-Nghi Droste, a design student based in Heidelberg and Darmstadt, has released as Boxtype on Shitkatapult (among others) and recently as Microbox on Andy Vaz’s Background Records. Dominick Baier can look back on a string of releases as Dolby Absurd on TV-Whatever,a label he co-founded in 1997. After their critically high acclaimed Turm3Disko EP on textone.org its about time for Baier/Box to release on Thinner, not only because the hometown (Mannheim) is the same but also for the fact that the weekly club die_lounge, co-managed by Domnick Baier, helped Thinner to do a couple of showcases. On Boxing/Unboxing we have four original tracks by Baier/Box that are remixed by reknown artists.

The lush opener track Atmung fiddles with dusty particles of microfunk until an organic pad draws through the playground. This track is slowed down by Thinners finest Digitalverein, who puts his unique dubchords and cyclings over the grained funk of the original to give it the original Digitalverein flavour. The second track Binary is a weirdo microgroover at its best with cut voices and inprovised flute interludes over crunched beats. In the end its perfect remix material for Frank Martiniq, the king of boxed microgrooves, who gave the track a more driving approach opposed to the granularism of the original. Track No.3 is Lushbits concerns a rather easy swinging classic minimal house track with easy access. Baier/Box thoughtfully gave the files to the Dubhouse legend from Frankfurt that is C*Rock, who runs his own imprints Stir15 and LoFi Stereo. Finally we have the wonderful Duck.Dub, a minimal Reaktorhouse cut that has been originally released on the third lounge Compilation called _lounge.essenzen Vol.3. Since we saw the emotional potential in this track we couldnt think of anybody else than Taho to reinterpret this song, though we didnt expect such a spacehouse blissed-out harmonic Trance anthem that astonished us completly!