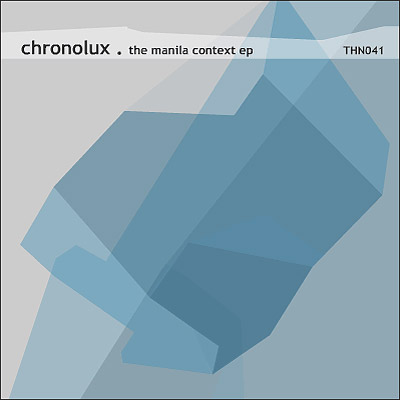 After his looming contribution on the “Silent Season Dub” compilation it’s time for Chronolux to represent himself with a proper own release on Thinner. Chronolux is none other than Dave Ellesmere, whose critically highly acclaimed full length “Angry Young Computer” was released on Kanzleramt in July. Ellesmere himself can look back on a music career lasting for almost 20 years. Being active in the 80’s as drummer of a couple of punkbands like “The Insane” or “Doctor & The Crippens”, for Thinner Dave releases a pleasing Detroit-inspired Dubtechno EP.

The opener “Refraction” is a catchy Dubtech Clubber that may have been very well a song of Daves sideproject Shapes & Forms, which is him together with Diego. The second piece, “Returning”, is more of minimal pressure, and might be an appealing tool for the MP3-DJs. The metallic harmonious and robotic “Sun Spots” leaves traces in the filings, while afterwards Chronolux disappears within a sizzling cloud of dubs with track “004”.

He will be back again - at the latest in January when he will tour across Germany for a couple of Livegigs as part of the Kanzleramt 10 year anniversary.