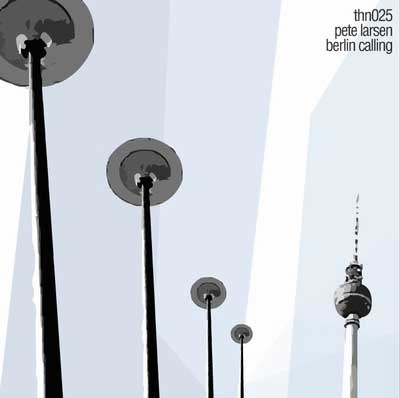 Thinners debut in 2003 starts with a clubby ep after the past, rather laidback, releases. The “Berlin Calling” EP has been produced by two Berlin artists called Dpete and Stesone. Besides the local roots, it’s a poem for the city where our first labelnight came real with gigs in the NBI and AUTOMATENBAR past october. Besides, we are lucky enough having received major warm critics in the past year by the high acclaimed “De:Bug” electronic music newspaper, so its not a big surprise one of the tracks is leaned on the fellas of the Brunnenstraße. The main track “Berlin Calling” by Dpete is a soulful city lights groover with warm chords and tasty bits of slacker funk. “Debug Frenzy” by Stesone comes with Studio-1 alike twisted bassline, discolight layers and yellow stabs. A prime-time shubber which might get each floor shaking. The flip track “City highway” is a long tube which works best when listened to driving by this huge city during the dark night, crossing tunnels and getting flashed by spotlights. Infinite pads and houling submarine chords make this song an intense voyage, same as the third Stesone track “Most of Her”, which consists mainly of samples from the excellent Curse track “Most of Here” from the fourth Thinner release and might best be categorized as remix of the named track.