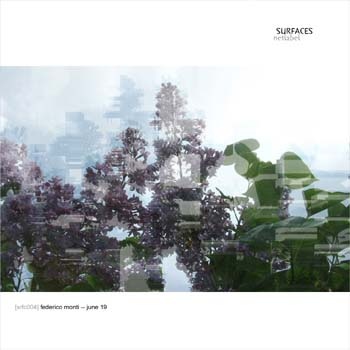 although it’s winter time, surfaces netlabel’s gift to its listeners will be a… bit of nostalgy for the summer with its sun-filled ethereal afternoons. this release is the first international one released by surfaces

federico monti was born and grew up in argentina. he was formerly a dj and after that he was interested in experimental music and producing his own tracks, releasing tracks for different labels from europe and south america. in 2001 he moved to barcelona and created his own record label, discosnoise, where he actually releases his own stuff as well as other spain-based sound artists like francisco lopez and victor nubla. today, his works as a sound artist follow the aesthetics of lowercase and microsound, using diverse sound applications and techniques for creating a balance between extreme frequencies, tonal textures and clean glitches, sometimes hidden just beneath the surface…ending up in a sonic pleasure designed for the deep listening

“june 19” is based on repetition of diverse layers, low oscillations, and grain drones combining rhythmic noise loops that appear and disappear in a perfect combination. the sound is as light as the white clouds on a mid-june sky. it’s perfect bacground music. try to think about the coming year’s summer spent travelling around europe while it’s playing in your room