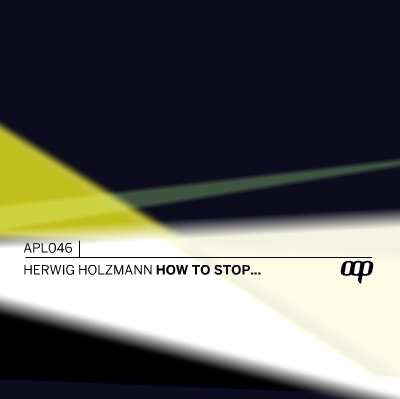 Herwig Holzmann, co-founder of netlabel Laridae, has been composing electronic music for about seven years. Now, after releasing music as Macon Tights and Photophob, he graces netlabel Autoplate with an album under his own name blending ambient atmospheres with gentle beats and warm melodies by way of “How to Stop…“

Working as Macon Tights, Herwig describes his initial albums as “mixtures of gloomy pieces of drum & bass and dreamy IDM tunes“ consisting of a multitude of “destroyed, altered, and rearranged“ audio samples. Later he changed his alias to Photophob, invested in some new software and hardware, and his sound began to evolve into something “warmer, less dirty, and more complex.“ His work as Photophob ranges from laid-back IDM to drill n‘ bass/break-beat to “slowed down, repetitive, ambient“ compositions, and, as even the most cursory listening will reveal, it‘s to this latter category that the sounds of “How to Stop…“ belong.

Herwig describes his method of making music as “musical storytelling“ - soundtracks for nonexistent movies. He wants listeners to create their own stories and images in their minds as they listen to what he describes as his pieces of “audio fiction.“ Most often when he creates a new track he begins with a hazy idea of the mood that he wants to establish and then instinctively generates sounds and rhythms that converge on that idea. The titles of the tracks, the artwork, and any samples used are as integral to his albums as the music itself. It‘s this network of ideas, sounds, and other parameters that he attaches to an album that allows its listeners to create his/her own mental picture (such as a story, a film, a painting, etc.) by association. As Herwig puts it: “My albums are intended as balanced dramaturgical stories, the tracks are the chapters.“ His approach to ambient is akin to that of Console‘s “Mono“ album or artists of the likes of Biosphere similar in style to the“ Scandinavian“ approach of smooth ambiance and sounds full of warmth and crackle.

In summarizing the album, Herwig says that “How to Stop…“ is about enjoying the immediate moment and taking pleasure in the beauty that our minds can bring into existence. It‘s “about stopping short, about pressing the pause-button of life and stepping out of the notional restrictions that our stressed out life‘s put on thinking and perception.“ From a technical viewpoint, “How to Stop…“ is an ambient complement to various complex rhythmic and beat-oriented releases that he has been working on concurrently. These ambient counterparts (of which “How to Stop…“ is an prime example) focuses more so on “calmed down soundscapes and repetitive structures.“

So learn how to stop … and press the pause-button of life for a few moments, breaking away from the daily routine long enough to let your psyche savor this new album of “audio fiction.“ Let these eleven ambient-leavened story-songs stir your mind and soul with over an hour‘s worth of mellow beats and serene melodies.