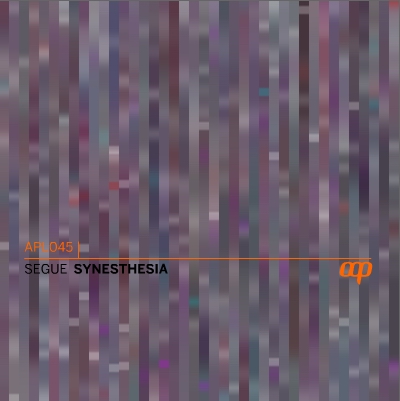 Retaining in his guise as Segue, Jordan Sauer makes a welcome second appearance on netlabel Autoplate. “Synesthesia” follows his impressive and well received August 2006 release “Forest Refractions” (APL039) which was described as a “moody collection of dub-inspired beats and ambient-dub soundscapes.”

The album’s title ties in with Jordan’s belief in music’s capability “to provoke so many different emotions not commonly encountered in other sensory experiences … .” The title “Synesthesia” was chosen after learning about a neurological condition of the same name which is the involuntary, atypical blending of bodily senses in which the stimulation of one sense causes the concurrent activation of one or more other senses such as hearing a color, tasting a word, or seeing a smell. More relevant to this new album, it relates to the union of the auditory and visual senses in art as demonstrated in the work of expressionist painters like Wassily Kandinsky (and other like-minded artists) who associated tones and chords with colors as he painted.

Jordan finds his music difficult to describe because it’s so often a reflection of his emotions during the creative process. The listener, in a different emotional state, might come away with a completely different impression of the sounds. While he personally finds the tracks on this album by and large “warm and comforting”, others might find them a little chilly and tinted with an air of mystery. The melody and beats used on “Synesthesia” are minimal, but there are many clever variations present to make the sounds interesting, pleasing, and entertaining

The album begins with a duo of relaxed, but deep, dub tracks. Despite a day of tension and noise, Jordan regards “Ah, the Light Shines In” as an aural metaphor of “positive emotion” inspired by rays of sun light shining in through a window during a late winter day. This is followed by the self-descriptive “Artic Air Dub” whose inspiration arose as a result of a period uncommonly cold London weather. It’s a “chilly, slow dub” with a “simple chiming melody” fashioned from a sample of vibrating wine glasses.

The middle third of the album arrives with the more rhythmic dub and Reggae influenced “Dready.” A clearly discernable filtered hi-hat, heavy doses of delay and reverberation, and a laptop interface combine to give a nice imitation of a conventional dub mix. This is followed by “Deep in the Forest” which Jordan aptly depicts as “a rainy adventure deep in the rainforest.” A layer of discreet hiss and crackle do indeed give the impression of a wet, leafy ambiance and the delay and reverb give a sense of space and distance. The main ingredients of this song are “grainy textures, re-pitched piano chords, and a heavy bass” coupled with a “prominent beat”.

The closing third of the album brings the listener into more ambient territory. “July” carries with it an euphoric atmosphere which Jordan says is analogous to
“the feeling of a well-spent summer day at the beach.” Dissimilar frequencies, high and low, bring both contrast and stability to this song. Appending nicely to “July” is the inviting and melodious track fittingly titled “Amber”
characterized by Jordan as a “warm, glitchy piece” centered around a hub of “layers of simple rhythmic patterns built with sine waves and filters.”