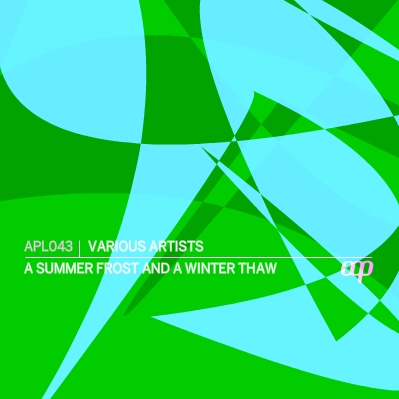 In May 2004 and then again in June 2006, Arrial brought two reflective, emotional and melodic albums to netlabel Autoplate by way of “This is My Beauty, Show Me Yours” [APL026] and “For the Love” [APL038] and now, almost one year since the latter, we find seven Autoplate artists offering remixes/remakes of songs selected from these albums in a new release titled “A Summer Frost And A Winter Thaw”.

As slightly alluded to in the title of the album, Arrial comments that the tracks when taken as a whole invoke the idyllic image of a nearly deserted tropical beach with a fringe of palm trees, an unoccupied hammock, and a close by path leading to a some kind of dwelling, but this relaxing scene is given a surreal hue as the entire landscape is covered with a light dusting of snow. The visual image of this pleasantly incongruous landscape is further deepened by the remixes themselves as each artist captures the spirit of the original track to varying degrees while at the same constructing something different. Some of the remixes have a philosophical motif that defines their design while others have been approached from a more realistic/technical slant. It’s this amazing creative ability of capturing samples of the original sounds, carefully processing them, and, in some cases, combining these with new sounds/samples and ideas particular to the artist, and then reassembling them into a new creation retaining the quintessence of the original song that makes remixing a rich and rewarding artistic endeavor. Lou Teti summarizes the remixes quite nicely: “One interesting thing that is underlined by these remixes is the extent to which even the same person, with the same starting point can end in such a different place with a just a slightly different approach. “

Daniel Blomqvist starts the album by finding the melodies behind Arrial’s guilt-tinged “Tomorrow I Start My Homework” so enjoyable that he ended up preserving much of the song’s original makeup. Tailored slightly to give it a more of a Daniel Blomqvist-ish sound, Daniel decreased the tempo somewhat and added effects and noise. Describing it as “a great pop-tune to begin with”, Daniel’s remix transforms it into more of an pop-flavored ambient piece.

The Lou Teti Backtalk mix is a second version of his remix (thus titled the “backtalk mix”) and is a sassy tune with attitude that is truer to the sound of the original track. By keeping the melodic progression
close to the original and by limiting the amount of editing applied to the original sounds, this remix retains the more of the flavor of Arrial’s version, including the addition of acoustic guitar parts (as opposed to the electric guitar used in the former) which allows this version to better reflect Arrial’s approach.

Off the Sky (Jason Corder) also remixed “Bitch, where’s the guns?” . While enjoying all of Arrial’s tracks, Jason selected this particular song to remix in good part because of its title, finding “something humorously ironic” about it. Jason used a lot of natural instruments in creating his remake, especially his own vocal chords because he feels that “the human element gives the music a more palatable, human touch.” Jason’s rework clearly walks the border of something noticeably darker and more somber than its counterparts on the remix album and, like Lou Teti’s first remix, it also took on a life of its own.

Fernando Lagreca gives his “predictable glitch” remix of Arrial’s “I Predict a Quiet” (Arrial’s poignant version the Kaiser Chief’s classic “ I Predict a Riot”) a personal touch by combining Flamenco-like guitar phases with subtle textures of glitch and by reflecting the excitement and melancholy of the South-Spanish spirit. He likens his remix to the “lament of a Gipsy robot” suggesting the peculiar image of robot with a guitar on a deserted beach calling for quiet.

Konrad Bayer’s remix of “Marpaksses” (Arrial’s song about the energy and passion accompanying the never-ending cyclic game of desire and pursuit) is a blurred image of the original. Melancholic and fragile, but in a positive way, this remix contains samples of field recordings from the Korean island of Bogil-do which became the home of the poet Yun Sun-Do (1587-1671) who became stranded there during a storm and loved it so much that he ended up staying for ten years. His poems are renown for their simplicity and beauty, qualities that Konrad hopes that he brings to his works.

In the original release notes Arrial commented that “Blank Holiday Monday” was “about feeling dazed after a particularly heavy night” and lying around on couch or in a hammock “watching the day go by.” Emil Klotzsch’s version does a particularly good job of retaining this bemused atmosphere. His remix uses only samples from the original song which are then transformed “so that there are still glimpses of the original” but to Emil it’s “more important to create something new with old material.”

Gultskra Artikler’s take on Arrial’s “Farewell Again” ends up being more of a new track than a remix by comparison. Blending samples of Arrial’s version with some signature Gultrskra Artikler sounds, this affecting song about loss and renewal takes on a life of its own and comes out being more accurately described as a remake.

So here they are presented to you for your listening pleasure, five of Arrial’s thoughtful, affecting, and harmonious songs remixed, remade, and reinterpreted by seven exceptional Autoplate artists.