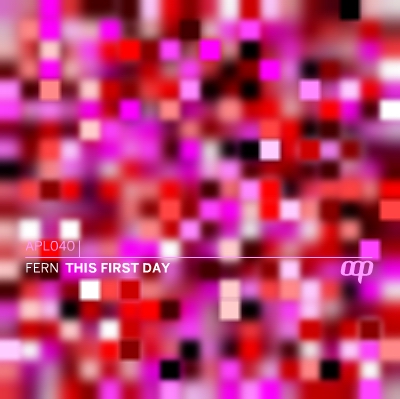 Netlabel Autoplate welcomes the debut release of Fern to its roster. Fern is the combined efforts of the German duo Johannes Rix and Jürgen Krause. Inspired by Aphex Twin and Nonplace Urban Field, both artists began to make electronic music independently in 1996. In 1997 they started working together using synthesizers, electronic bass, personal computer, drum computer, Boss digital delay, and multi-track tape recorder as their primary tools.

According to Johannes, the inspiration behind this first day was twofold. Monday, being the first day of the work week for many people, can be filled with a “strange kind of emptiness.” So this album is dedicated to this first day “when ideas emerge out of the void that are worth working for.

“this first day is both a personal reflection of the melancholy associated with that vacuity and a means to fill this empty space with their own cinematic blend of electronic sounds and samples. There is also the aim to capture a naive wonder similar to that which arises when a child makes a new discovery, or as Johannes describes it: “It’s our intention to find sounds that surprise time after time anew. Listening out with ears wide open for something in between sounds. Like a child that – for the first time in life – moves a big stone on the meadow and discovers and admires the creeping worms and woodlouses. We would like to capture this fascinating moment of discovery and make it last.”

The source material for the ten compositions included on this first day are derived from the artists’ record collection and include samples of children’s songs, classical music, progressive and psychedelic rock, folk, and jazz. Sampled sounds and fragments of melodies are blended with electronics to create an amalgam of mind affecting ambience. As a whole, this first day exudes a naive playfulness and allure that will gently draw the listener into a beguiling world of mostly beatless ambient sounds and melodies. To summarize the album in three words - beautiful, surprising, and reflective.

The album begins with the atmospheric and space-filling “Morgen’’ - a track that is both a lament in anticipation of that first day of the week and an initial expression of the pervading atmosphere of the album described by Johannes as “the melancholic feeling that the magic of the first moment is transient.” The smooth ambience of “Morgen” is interrupted by the choppy drum programming, discordant sounds and toy-like noises of “Nachtschattenweg” which are complemented by resonant chords and a catchy bass riff. “Wolkental” follows with a blend classical nuances, wavering chords, light beats, and a rich bass melody. The noisy “Sie Kamen und… “ is next with an initial frenzied collage of watery sounds, railroad crossing warning bells, voices, deep chimes, and sampled orchestra that eventually settle into the background as strummed chords, deep bass lines, and faint melodies arrive. A hazy ambience returns as the brooding “Zerinnung” delivers distorted electronics, sad droning chords, a forlorn melody, and low-end bass. The looped melody, sparse bass, and effervescent electronics on “Geysire” rise above a steady stream of minimal percussive sounds. A familiar rhythmic shuffle and improvised bass evokes a nostalgic jazzy atmosphere on the grainy “In Vitro”. The hesitant metallic electronics on the beatless and dub-tinged “Stratos” orbit above a pondering flow of minor-keyed chords and bass. “Nebellauf” greets the listener with a tangled blend of muted guitar notes and odd fragments of percussive noises before an ethereal melody and reverberating sounds mark the arrival of a space-like ambience. In the end, “Abends” takes the listener back to the album’s melancholic origins with beautiful choral samples, sad melodies, lush chords, and warm ambient crackle.