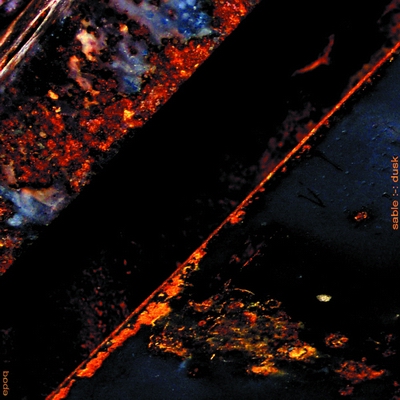 Australias Epoq works under his Sable guise with long evolving layers of mystic, yet mindcleaning and calm ambient spheres. He aims to develop music which can quiet and focus the mind. Music can and does play an important role in meditative practice. ‘Sable’ seeks to create music which is less complex and intellectually demanding than my other music, yet also not devoid of an ability to alter one’s mood.

While these tracks may be intended to help the listener seek stillness and peace of mind, make no mistake, they are dark tracks, with brooding moods attached, hence the name “Sable”. They express the serious, bizarre and often feared nature of mind and body seperation experiences. The dark aspect of this music represents the noise of the black matter inside one’s eyelids as he/she stares out into the nothing, amplified by the suffocating silence of deep meditation.

MYO·PIA: [dict.] A visual defect in which distant objects appear blurred because their images are focused in front of the retina rather than on it; nearsightedness.

One starts a meditative journey by the blocking out of all that exists outside one’s own being - one must become nearsighted in order to participate.

BEN·THAL: [dict.] Relating to the deepest zone or region of the ocean.

One discovers the vast depth and power of the active mind and makes one’s way towards the ultimate depth of an ocean of thought.

CHO·REA : [dict.] Any of various disorders of the nervous system marked by involuntary, jerky movements, especially of the arms, legs, and face, and by incoordination.

The body lets go and conciousness moves away from the body, the mind experiences movement of a different kind as it tries to orient itself without the help of the body. The mind’s inexperience in this area often makes movement difficult.