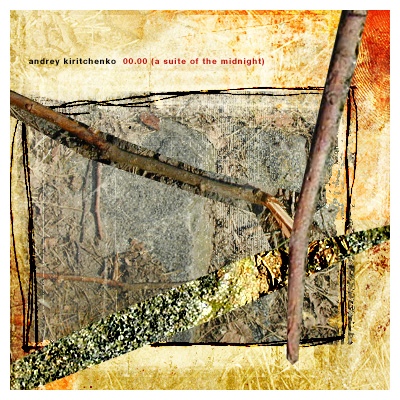 Resembling an insect zoo of skittering electronic tones and textures, one is advised to be on guard as they envelope three-dimensional space via binaural injection.

Kirichenko composes music without clear rules and definable borders. His pieces are allowed to breathe: exhaling and inhaling like a living organism whose pulse is framed by the soft murmur of the kick drum.

The marriage of organic with artificial, floating atmospherics with particle funk, and themes of humanity versus the machine are filtered through the unique and singular perspective that could only be Andrey Kirichenko.

Read the interview with Andrey about the album production, his pioneer status in the ukrainian electronic music scene and his future plans and appearances.

SR: What does the tracktitling reflect?

The tracks stand for the different time zones of the night, What’s reflected in your eyes, what one is thinking about while unable to sleep at night …when having insomnia, or just going outside to see the stars, smoking a cigarette, drinking wine.

SR: So the theme of this album reflects the passing-by of a night … were most tracks created during the night?

Yes, all tracks were created about midnights. I^Òve got a little son, who uses to screw up my computer and my headphones, so i prefer doing music when he’s in bed, dreaming.

SR: What is your current day-job - does your daily work inspire you for making music during midnight?

I’m working as a webmaster these days, and this job doesn’t really inspire Me. Though one year ago, when i worked as a scientist on artificial intelligence, it was much more inspiring for me. At those time i created the “4E4558.424F54” album for my Nihil Est eXcellence project.

SR: Which musicians do influence you - can you describe the “Kirichenko landscape” ?

While writing this album I was very influenced by 3epkalo - a project by Kevin Bolster, an ep and a full length by this project will be released on Scape this year. His sound insprired me a lot.

Another artist with a very unique sound is Uwe Schmidt - I’m a big fan of his Atom Heart project and his present Geez’n’Gosh works. And of course my comrade - Andreas Tilliander.

SR: You’re a musician of the hardly-recognised country (in electronic music case) Ukraine – do you plan to stay there, is it a very inspiring country? How does the electronic music scene look there?

Frankly speaking, I’d be very glad to move to central europe, ‘cause nobody here Is really interested in this kind of music. Pop music is everywhere here, except few exclusions, the maximum are breakbeat, house or drum and bass … probably, it’s a temporal state of ukrainian music scene, I hope there will be a lot of new developments this or next year, and it seems like I need to get things better with help of my Nexsound label, gaining more attention to the ukrainian “underground” scene.

SR: Can you tell me about your other projects?

Except on my own name I’m doing music as ‘Nihil Est eXcellence’. It’s musique concrete / drone / experimental music and under ‘Sidhartha’ I do idm / ambient stuff.

SR: What are your future plans?

In the making are collaborations with Francisco Lopez, Kim Cascone, Kotra, Jonas Lidgren and the Moglass. A full length on DTA records in autumn 2002 and A new 3” cd on Soul Worm Editions this summer of ‘Nihil est eXcellence’.

Probably some techno stuff somewhere, contributions to microsound projects (John Watermann remix project, BufferFuct, etc.) and two compilation appearances under own name, and of course to find online or offline labels to release a lot of my other unreleased stuff :)

SR: Thanks a lot for answering these questions.