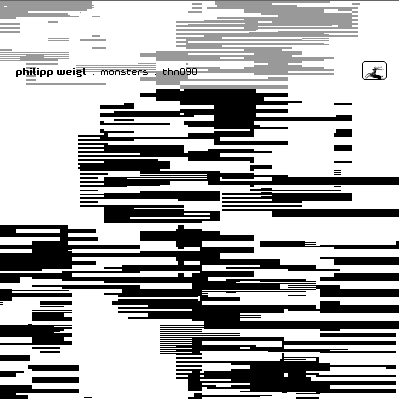 Fitting naturally into the autumn mood and reflecting the satisfying warmth of a relaxing evening at home, the Munich- based electronic music artist Philipp Weigl brings his first album to Thinner following the release of “Silently Moving” on Legego one year ago. “Monsters” is influenced mostly by the music of Björk, Portishead, and Radiohead along with the lyrics of Nick Cave and, in a minimal way, by his studies of classical piano at the University of Music and Performing Arts in Munich.

“Monsters” is about music and lyrics. They emerge independent of and unconnected with one another only to meet for a conjoined dance. The music and lyrics are deferential of one another with the music coming out of a creative void and the lyrics being formed by a blend of experiences, dreams, fantasies, and memories. Spoken in a low, whispered voice, the lyrics do not rise above the music, but drift just below the surface making their presence known without being intrusive. At the same time, the music intensifies the predominantly subtle character of the lyrics in order to reveal the fine humor, irony, and emotion hiding within them but without affecting them too hard. The resulting sounds are at once melancholic and dark but also harmonious and warm.

Listening to the songs on the album creates a feeling much like one gets during sleep as our dreams reappraise the day’s experiences. Immediately awakened from a dream every part of it can be recalled and each nuance can be experienced and seen with the inner eye as a phantasmagoric slideshow of continuous images. Slightly disoriented, we ask ourselves - was this real or was it a dream? As the day progress and our memories degrade with the passage of time, details of the dream fade away and only vague fragments remain like a collection of disjointed snapshots.

The eight songs on “Monsters” describe pictures of daily life from the viewpoint of a dream with emotions ranging from slightly unsettling to wistful. For example, listening to “Unrelated” we hear, “I found a letter in my bag that was written in a language that I don’t understand.“ Philipp translates this into the disconcerting feeling that there seem to be events in life that are completely incomprehensible to the individual person while at the same time appearing to be understood by everyone else. On the other hand, the mood turns melancholic and nostalgic on “Lifted” as we hear the dreamy juxtapositions of unconnected sentences: “I’m lying on my back and I’m watching fireworks.” - “I’d like to dance like the others do.” - I can hear the distant laughing fleeting away.”

Listening to this album is just like waking up from a dream.
We ask ourselves the question whether the lyrics are really so full of secrets and mystery or is this just an illusion,
and are they merely dealing with the small problems and occurrences of everyday life?