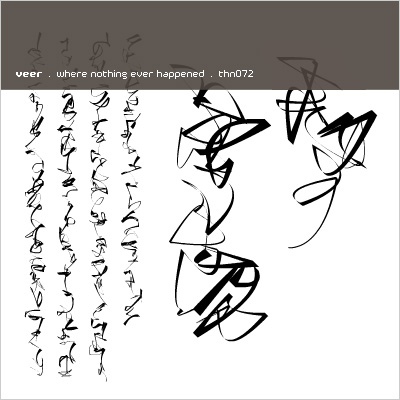 The native Frankfurter Ole Schulte already worked at the renowed design office ‘Surface’ before he started to do music by himself. One day Ekkehard Ehlers heard Ole’s first demos and immediately recognized his potential so he drove him to the Force Inc. office the very same day. From this point a couple of Veer contributions were put out on Force Inc. until his first solo album got released on Move D’s Source Records in 2002.

Since then Ole intensified researching and sound design and started to build up his own studio aswell as he started to work with different singers. At that point of time he started to work as a designer, particularly for Sven Väths ‘Cocoon’ Label where he’s in charge for the website and the record sleeve designs. Veer’s creative efforts also includes the automobile fair in Paris 2004, where he designed a constantly changing sound landscape.

Veer’s first release after a longer pause is entitled ‘Where nothing ever happened’ and seamlessly continues to the recording sessions for his Source Records album entitled ‘Lideskape’. Within this context the release is meant to be an overlength EP of material that homogenously fits well together - it is not supposed to be an album. Four of the nine tracks from this release are interprations of the core sample material. Contributors are Lowfour aka Andreas Tilliander, Geoff White and Jacek Sienkiewicz.

‘Where nothing ever happened’ carries Veer’s thought of diversi- fication directly into the ear of the listener to spread there its wideness and variety. The release begins with 2 large rooms full of blissful white ambience where singer and songwriter Malte Schlorf (Losoul/Playhouse) is featured on the intro track. The concentration of Maltes voice and the blurry soundasthetics in ‘Präsenz’ creates a distinc grade of ‘Presence’ within the room - just as both artists intention of creating music within this particular context is to start off without any dictations.

It is about losing oneself in the process of researching and assembling while trying to create a room without any preconditions but retaining the very moments of sudden ambience.

With the title track ‘Where nothing ever happened’ the listener dives into a realm of nothing and vast. ‘The Path’ keeps guidance in the 4/4 way with polished deep basslines and subtly vanishing effects. The smooth background pads feel like a warm coat. ‘Vacio’ continues the guidance but it more of a metallic ambience with a detroit feel, somehow distant and cold, but still warm and clean.

Following the four original tracks we have the interpretations evolving the construction, each emanating its own fascination by falling into place at the same time. The Lowfour interpretations feel like sessions, as they originate from the same starting point but go entirely different directions, with the first one taking the shuffle-exit while the second one is more of a scattered 4/4 experiment taking place. Geoff White’s inter- pretation is sort of an unpolished minimal construction that incorporates a serene beauty that unfolds during careful listening. Jacek Sienkiewicz surprises with a straight and crisp dubtech tweezers.