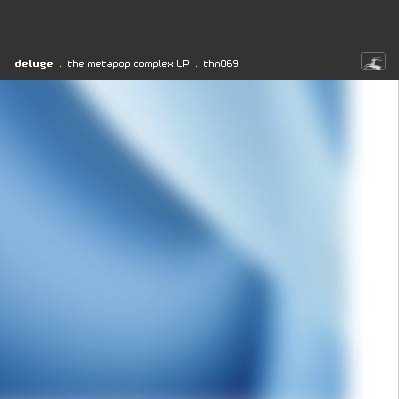 If you ever happen to visit Montreal one day and by times decide to go to a restaurant to have a good meal you might unwittingly enter the realm of one of Montreal’s most secret musicians. At this particular place there’s a good chance that the music surrounding you is Thinner and the creator of your meal is nobody else than Jean-Sébastien Roux aka deluge. Jean-Sébastien is not only creative behind the kitchen stove - after work he keeps being immersed in his work, but then it’s in front of his computer with headphones on.

“Creating music is always dragging me deep into something I don’t really handle; I like being tranported by the music and feel the abandon of creation. The reason why I create ‘deluge’ apart of ‘tlon’ is for this simple reason: tlon is my experimentation aspect, and deluge is my playful aspect. It’s like reading a book by Deleuze and then reading a Marvel comic, it’s about different moods and catching the train within. My new album ‘The Metapop complex’ is the result of an interior battle between mentality and body language.” If last years first deluge release on Thinner called “Departure in affection …” would be painted in soft orange then the new album “The Metapop complex” is painted into blurry blue. But how could that transition in colours being explained?

After “Departure in affection …” Jean-Sébastien tried to focus on doing more accessable, clubby tracks that would be easier to get into. From this point of composition the “Metapop EP” arised, whose 4 tracks now form the basis of this conherent and homogene new album by one of Montreal’s most reclusive musicians. Since Jean-Sébastien is more sort of the bedroom producer trying to find the sound behind the sound his current state of mind allowed to expand the existing EP into an LP while keeping the context.

Hereby, the title can be read as a division, or a certain level of creation, to search for non-mental music. Why a complex? Roux considers his music to be straight to the point, always subtle but yet intense. There is something brave and profound in the sound, that is like transposing a kid’s dream about being a Superhero and saving people in music, just like in a Marvel comic.

Soundslike, this album works with many analogue-tinged elements that reminiscent to the mid-90s sound aesthetics, a certain level of technology that has almost died-out since most releases of today link to the most current dsp-plugins available. After Kraftwerk, Depeche Mode and similar bands, Roux’s total immersion into electronic music has been mostly accomplished with the Warp catalogue, Transmat and the essential Detroit stuff. And that’s exactly with the idea of deluge with the Metapop Complex, a less sparkling and more direct sound. “I may want this project be an open mind creator, in opposition with tlon who’s really into soundscape and research and intensity. Tlon looks inside - deluge looks outside.”