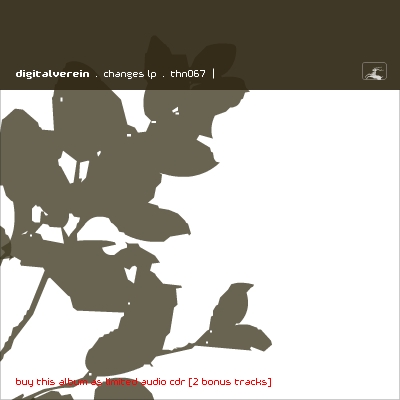 Joerg Schuster from Dortmund, Germany, is a vital graphician and music architect. One of his three projects, Digitalverein, is reknown to be one of the labels main artists, since Digitalverein keeps releasing on Thinner for over 3 years now while still not forgetting his design work that has established the Thinner modulating trademark flash graphics. So it’s good and somehow symbolic to see that it is Digitalverein closing the year 2004 for Thinner, which has seen many important steps for a better tomorrow.

While his first album ‘Zu Hause²’ was a classic deep and intimate steamy electronic dub journey, the second album ‘Internal Course’ from June 2003 reflected a more minimal period of his work, sometimes fluffy, always organic and even a bit poppy.

Since then Joerg has developed his style further and now showcases his current grade of sound experience and emotion. ‘Changes’ is his most conceptual album so far. Songs that stand for itself, based on own private stories that transpose their distinct grade of emotionality from Joergs understanding of the very moments life has to offer; Songs that reflect, if shifted together, one whole year of the authors soul. Schuster once again manages to create his own language full of a profound meaning, detached from form and function that might appear restrictive.

The difference between ‘Changes’ and earlier works are the sketch impressions these songs carry - therefore they stand much more for the direct impulse of experience, free from all concepts and thoughts that were accumulated before. The songs are immediate conversions between emotion and feeling. Without aiming traditional structures, only following the soul in the moment of origin, Digitalverein defines spontaneous improvisations within this coherent album, that are shaped out of the psyche.

The songs represent geographical impressions, e.g. ‘San Marco by night’ reflects the beauty and calmness of this magic Piazza in Venice with its bypassing boats and ships at night, glooming in the moonligt; or there is the song ‘Walking and finding’, which is inspired by walking around in London trying to find the things Digitalverein didn’t want to find. Sitting in trains to Brockley and moving through different scenes; spotting crazy people within peaceful moments and walking by the river Thames at night. It’s about the experience of deep moments, would it be either about love and trust, or about sustaining friendship, while still new people would arrive - Digitalverein manages to keep the scenes that move him to conserve them in his mind, to later on reflect them musically by painting it in ‘dub’.

‘Changes’ is about quitting and new beginnings, maybe a try to breakout of a self-defined cosmos to find out what future will tell. As we’re all living in a hectic world, ‘Changes’ might be the perfect accompaning Soundtrack in these hi-speed times.