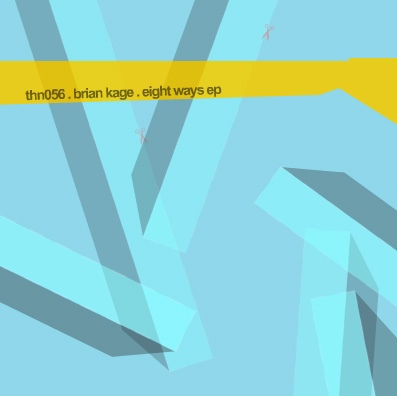 Brian Kage is one uprising talent from Detroit, whose music exactly transposes the melancholy, yet somehow optimistic feeling of the city he’s living in. Having released 12’’s on Beretta and Lumina earlier this year, Brian appreciates the idea of releasing music online to attract a larger audience – therefore Thinner is the right place to drop his dreamy melodic Detroit techhouse choons. With the Eight Ways EP, Brian wrote each song about his various travels through life. Each song represents vivid memories that have influenced him as a person.

The idea of change is a big theme with this EP.

The title song, Eight Ways, is a deep, melodic journey exploring the idea of the various paths we come upon in our lives that will ultimately alter our future. In Brian’s life, eight always seems like a magical number. It likes to appear at the points in his life where he feels on the right path. Brian feels that there will be eight ultimate paths to take in his life to complete his mission. Dennis DeSantis, native Michigan’ aswell, reworked Eight Ways (Dennis DeSantis Mix) and gave the song a very seducing appeal by adding blissful harmonies and beautifully filtered chords. His own careful melodic edits give it a unique charming touch.

Laguna is a jazzy little number about achieving one of life’s many goal. It’s like the carefree freedom you experience as you finish a big goal, that allows you after accomplishing to make your life what you want it be. A lot of this song was influenced by sunny days spending at the beach in northern Michigan. Our friend Taho from France, owner of Lumina took a chill pill and remixed Laguna (Taho Remix). His filtering on the bassline gives it a subtle 80’s touch, while the stabs and pads are more pulsating and spacey – as the whole remix is put in a wide and warm bed with carpets of shining stars around.

With writing Luna Twilight, Brian wrote a song about the power of change in our lives that can be so instant, and how we tend to take the important things for granted. A long time ago, Brian lost a close sibling. He was young, and suffered from the darkness & despair. It took many years, to learn to cope but meanwhile, while walking under a pitch black northern Michigan sky, gazing at the stars, Brian feels the presence protecting him. The Luna Twilight (Paul Keeley Remix) is very densely and satisfies by transforming and shifting the main pads of the original and applying a clicky, yet intense touch.