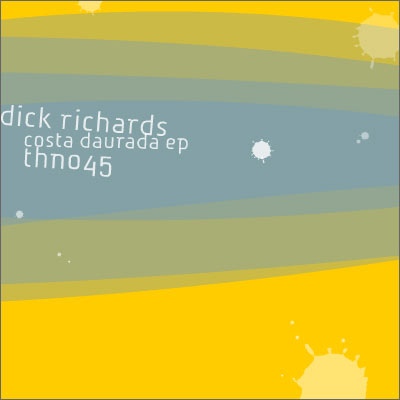 Dick Richards lives in Toronto/Canada and has played bassguitar in various canadian Punkbands early in the 80‘s. At that point already Dick was influenced by Dub/Reggae. End of the 80’s he left Canada for several years to live abroad in Barcelona and Sydney for a while.

As he returned in the Mid-90s to Toronto he began to deal with electronic Music and soon had a prolific output. Meanwhile Dick has been working with the Canadian Netlabel “NoType” for years and has released most of his works there. At one point he began sending out demos to various Labels and on top of that got signed by the German label “Raum…Musik”.

2001 he released 12’’s on Below and Raum…Musik, that has been followed by the 2002 Album „Amanecer“. Since the album was critically high acclaimed, he toured arcross Germany.

Dicks Debut on Thinner carries on the particledubhouse impression that was left by „Amanecer“ – in „Fingerscent“ and „Suplix“ Richards interprets the - classically viewed - rather largely wallpapered Dubhouse Genre through rather experimental glasses. His cuts are packed tracks under cracky surfaces, though not without leaving a spicey taste of deepness. “Tarragona” is a sultry Dub which is short before implosion, with the pushed out steam blows from every corner. Deliberately “Tarragona” leaves traces around the dancefloor, that is being prepared by the large dubbassline. The shuffling Pheek Remix of “Fingerscent” rounds off this solid EP.