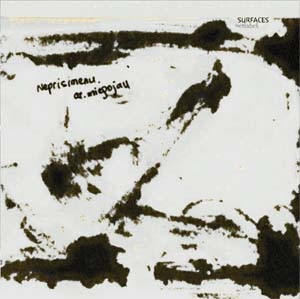 this release is yet another full work by an artist featured in the very first release by surfaces. this time it’s rising_spirit’s turn. while he has been active organisig and participating in various events and performances during the last year, he also found time to complete this collection of eight tracks, the name of which can be translated from lithuanian as ‘i don’t remember if i slept’

talking about the music, it can be said that rising_spirit finds a balance between creating idm-esque structures and not sounding obvious and banal. there is something in his music that distinguishes it from most other idm musicians and makes it sound interesting, rather than technically perfect but faceless. maybe it’s because of the constant presence of other stylistic elements and the author’s highly personal sensibility. drilling glitchy micro-rhythms intersect with static beats, sweeping effects, deep atmospheric pad lines and voice samples

the album contains quite a bit of diversity. some tracks are colder and darker, while others are more radiant and warm, and still others have elements of humour. all together they form a work that resembles a dream, which might well have been an illusion