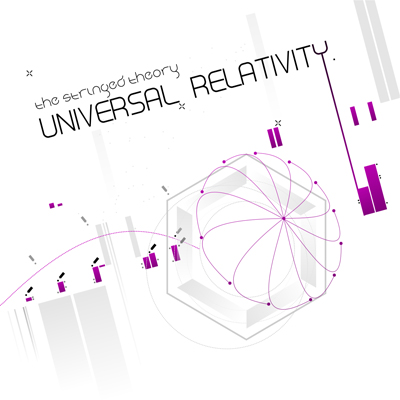 The Aesthetics Of Everything

It’s been a long time until the philosophical thought of indivisible and fundamental elements of matter, atoms, developed via the concepts of the antiquity and medieval alchemy into a consistent and explanative system. By the time the periodical table of the chemical elements was developed, smaller elements than the supposedly indivisible atoms already were constitutive for their description. Only shortly afterwards, the protons and neutrons that, together with electrons, build atoms, were confirmed to consist of even smaller units, called quarks. The now supposed elemental particles - quarks, along with electrons, neutrinos and their relatives - carry values of mass, energy, physical flavour and other attributes that seem to have no relation to each other at first sight. To explain these values, a new approach - the string theory - has proposed that all of these particles aren’t actually zero-dimensional points of different characteristics, but one-dimensional strings, whose different oscillations constitute their attributes in a simple way, and in a relational system.

Unfortunately, the predictions of the string theory that explain the attributes of the fundamental elements of the universe in such a plain and elegant way were and still are far out of reach of experimental certification. Many physicists thus believe that arguments for or against the string theory are of a non-scientific, or even theological nature. But while the fact that a new and possibly important theory remains uncertified for a long time (measured in present-day progress in the natural sciences) is obviously undesirable, the underlying thoughts that make the scientists predict a more simple and aesthetic theory based on rough approximations of its equations is a basic principle of philosophical arguing and scientific progress. The conclusion to the easiest explanation, or ‘abduction’, as introduced by Charles Sanders Peirce, is methodologically similar to inductive reasoning, which is indispensable to empirical sciences, but fails to have that recognition.

While the string theory might still, however likely that is, turn out as a wrongly formed simplification of natural relations, the implications of its assumption must not be ignored. The discussion about aesthetics as a constitutive part of our world view is an enriching and exciting new point.