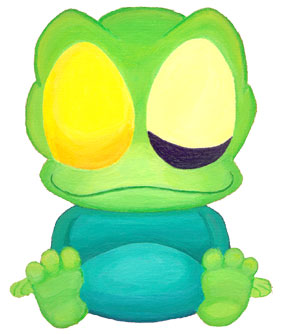 None other than the don Mortimer Twang himself alerted us to a whole album of Swedish artist Qeshi’s music floating out there in the ether, and when we asked the artist himself nicely if we could release it on Monotonik, he kindly assented. But who’s Qeshi? Currently studying in Japan, you may have heard of him from his two tracks that were featured on one of Lee ‘Metamatics’ Norris’ ‘Cottage Industries’ compilations on the excellent Neo-Ouija label, as well as his Flash videos that seems to be rather popular over at NewGrounds, and this album only extends his complex, gorgeous idm sound even further.

We start with the neatly named ‘Moshi Moshi Qeshi!’, which is just wonderfully composed melodic idm - a signature of the Monotonik sound for almost the last ten years. All nine tracks are special in some way, but some of the other highlights are probably ‘Tulip Lilt’, with its refreshingly together sound, the schoolkid-resplendent ‘Take Care Of Your Onaka’, and the almost choral ‘Nattskimmerfly’. Finally, ‘Vilda Och Delfinen’ rounds things off with some more well-deserved, special melody action. Basically, this is a gorgeous classic idm album, and we’re delighted that Qeshi let us release it. Moshi moshi!