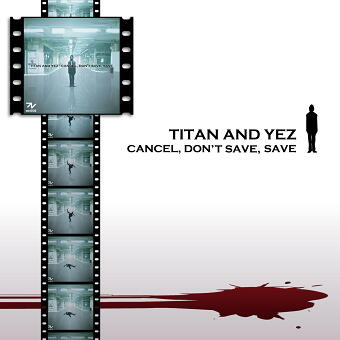 what we have got here are some excerpts from intensive eight hour live improvisation by norwegian artists, titan and yez. they are rough and raw but absolutely real and beautiful with all the hiss, glitches, pops, distortion and even skips that are meant to be there for the aesthetics of noise - capturing the very essence of the jam session. we were afraid of losing the energy and passion that the rough mix or edit of the original session had by further editing, so we just took them as they were and went straight to the mastering process.

it is such an impressive work. we just had to ask them what motivated them to start the project together and the process and setup of it.

morten: we both always have had an interest in music from all corners of the spectrum, and i think the first time we played was when yez was a stand-in for the rhythm guitar section in a band i played the lead guitar. the band was called ‘koala rundpult.’ it was a short lived but explosive rock band around ‘97… and then, gradually, we both ended up building up more with electronic equipment and computers. while doing so, we had started to do long improvised sessions - meeting every now and then to record. we just always had this weird urgency in doing it. 60% was for fun and excitement, and 40% was for therapy. i have personally been doing mostly solo projects and dj stuff, and for me, it’s just fun to play with yez.

in the first sessions, there were a lot more of analogue equipment and homemade stuff. then, we got more computers synced by bpm and also by ear. in the mean time, we got more into noise related sounds, and now, i guess we have our own setups that we bring and setup, sync and play, but they are still difficult to give a good description. i’m totally schizophrenic, and yez is a fan of making his own machines in reaktor and max and using no-input mixing board, various outboard effectors and sequencers etc… i also use reaktor, reason, trackers and all sorts and a trusted korg ms10, but the main thing is that we use the software as a sequencing engine for our sounds.

we change our roles as we go on, but they are pretty much divided into beat/rhythm section and other sound section… once we’re on a roll, it gets more difficult to say who does what… but we both take pride and time in our source material and the treatment of the sounds.

most of their solo projects are noise related, but you can apparently hear four-on-the-floor from this session, so we threw this final question at morten. ‘if it’s not for dancefloor, why rhythm section in the session?’

morten: ideally, we’d play in clubs for the dancefloor, but it’s just yet to be realized… and we do dance while doing it;) the rhythm is also for setting small sounds into the system, but we are obviously approaching the four-on-the-floor in this album.